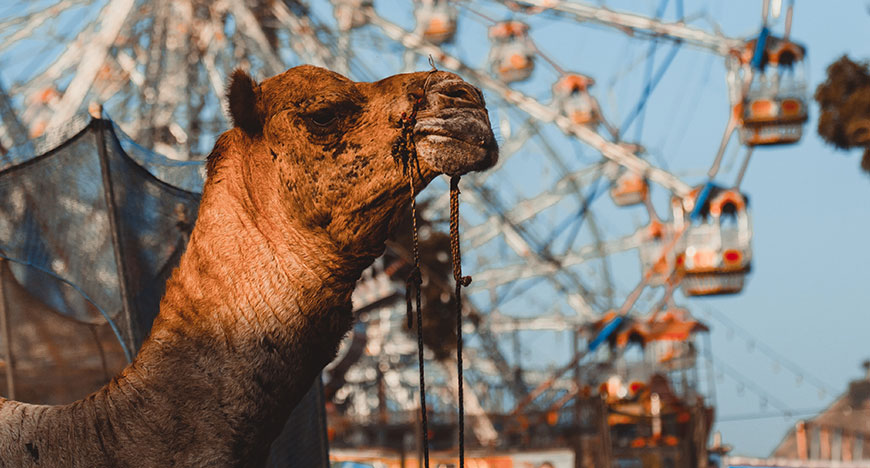 Pushkar is a holy city in Rajasthan, famous for its Brahma temple, lake, ghats, and bazaar. Pushkar is situated at a distance of 142 km from Jaipur.

Pushkar is one of the five sacred dhams (pilgrimage site) for devout Hindus. The word ‘Pushkar‘ means lotus flower, which is said to be the seat of Brahma, one of the Hindu holy trinity, who is worshipped as the creator of this world. The legend has it that the demon Vajra Nabha killed Brahma’s children, he in turn struck him with his weapon, a lotus flower. Vajra Nabha died with the impact, and the petals of the lotus fell at three places. One of them is Pushkar, where it gave birth to a lake. Brahma is supposed to have performed sacrifice at this lake on Kartik Purnima (the full moon day of the Kartik month (generally in the month of November)), hallowing the place.

Though Brahma is considered to be the creator of the world, Pushkar is the only temple of this important deity in the whole world. This is also considered as Adi Teerth or Teertharaj meaning ancient holy place or the most important of holy places respectively. There are not many temples built for Brahma because his influence to the daily life is considered not a big as Vishnu (Preserver), Shiva (Destroyer) and Ganesh (Remover of Obstacles). Being the creator, whatever being created is already there, whereas other deities’ need to be appeased so that any wishes or favours can be granted or fulfilled.

Early in the morning our driver will pick you up from your hotel or any other location in Jaipur and escort you to your car. Later you will be taken for an excursion tour visiting Ajmer and Pushkar.

The Dargah Sharif of Khwaja Muddin Chishti is situated at the foot of the Taragah hill, and consists of several white marble buildings arranged around two courtyards, including a massive gate donated by the Nizam of Hyderabad and the Akbari Mosque, built by the Mughal emperor Shah Jahan.

Pushkar
Pushkar is one of the oldest existing cities of India. It lies on the shore of Pushkar Lake. It is often called “Tirth Raj” – the king of pilgrimage sites – and has in recent years become a popular destination for foreign tourists.
Pushkar has many temples. The most famous among all is the Brahma Temple. The Pushkar lake has 52 ghats where pilgrims descend to the lake to bathe in the sacred waters. Pushkar is also famous for its annual fair (Pushkar Camel Fair) held in October to November for a period of seven days.
Later in evening drive back to Jaipur. Thank you for being our guest, and as we say in India ‘Please Come back Soon”.