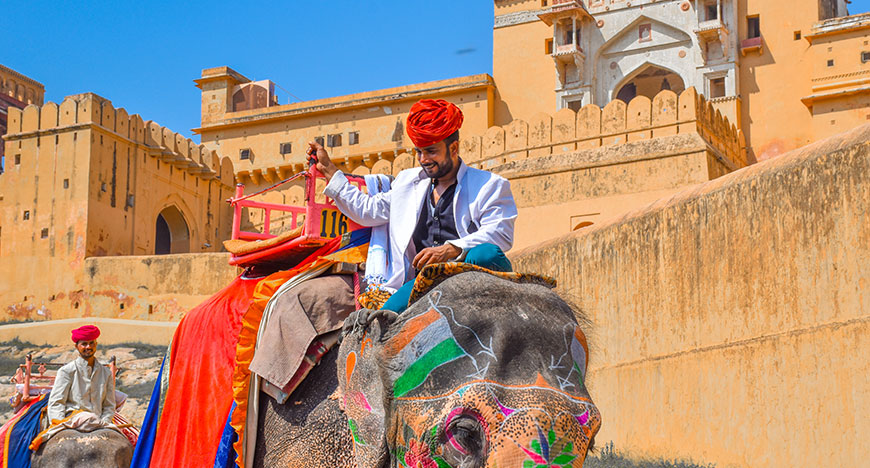 On arrival at Delhi International Airport you will be greeted by our representative & transferred to your pre – booked hotel. Relax & rejuvante yourself at hotel.

On arrival at Delhi International Airport you will be greeted by our representative & transferred to your pre – booked hotel. Relax & rejuvante yourself at hotel.

Establish your morning with a guided tour of Old Delhi. Starting with Raj Ghat , where India’s son Mahatma Gandhi cremated. Visit the largest mosque in India known as Jama Masjid.
Take a rickshaw ride in narrow lanes of Chandni Chowk , old bazaar of Delhi. From here we ahead to Red Fort , built by emperor Shah Jahan in 17th century & labeled by UNESCO as world heritage site.
Post lunch you will be taken for a tour to New Delhi planned by Sir Edwin Lutyens. Visit the Humayun’s Tomb, memorial of Mughal Emperor Humayun, built in 16th century & renowned as World Heritage Site. Our next attraction will be Qutub Minar, the tallest minaret of world & a perfect example of Indo-Islamic architecture & listed in UNESCO’s world heritage site.
Also visit the India Gate & President House, the official residence of President of India. Overnight at hotel.

This morning drive to Samode, a jewel in the crown of Rajasthan & renowned for its maginificent palace calls Samode Palace. Upon arrival check in at palace. Evening unwind yourself in the local streets of royal village & know the rural life of villagers. Overnight at hotel.

After a hearty breakfast leave for Jaipur, the pink city.Upon arrival check in at hotel & establish your day with sightseeing of Jaipur, visit the City Palace, a perfection of Rajput & Mughal architecture, Palace of Winds popular as Hawa Mahal, a five storied building built in 1799 to enable the royal ladies to view the outside life & world.Later opt for Jantar Mantar, a astronomical observatory.

Morning check out from hotel & head to Amber Fort, the majestic fort located at the top of Aravali Hills. Take a short ride on elephant’s back to reach at the fort, a overwhelming experience.
Later drive to Jodhpur at the edge of Desert was once the capital of strong & powerful kingdom Marwar, also called as Blue City of India. Upon arrival check in at hotel.

Spend the day visiting Mehrangarh Fort, most imposing fort of India & houses of excellent museum. Visit Jaswant Thada – A cenotaph of the rulers of Jodhpur built in lucid white marble & Umaid Bhawan Palace.
In the afternoon take Jeep Safari to Guda Bishnoi Village , a locality of the race who firmly believe to protect their surroundings & loves nature. See the tribal colore & rural cultural grandeur of villagers.
Come back to Jodhpur & overnight at hotel.

On the 7th day of your tour the itinerary rewards to Kumbhalgarh, a wary sentinel of Rajasthan & famous for its massive fort. Upon arrival check in at hotel / resort.
Plunge yourself into the visit of Kumbhalgarh Fort, is one of the 84 citadels of Mewar Dynasty & constructed in 15th century. It is the birth place of great Maharana Pratap.
One can visit the Kumbhalgarh Wildlife Sanctuary to see the Sloth Bear, Antelope & other species. Ovenright at hotel / resort.

After a hearty breakfast drive to Udaipur on the way visiting the temples of Eklinji & Nagda, dedicated to Lord Shiva who is guardian of Mewar Rulers. Visit the temple of Eklingji & other various spots.
Drive to Udaipur a romantic city of Rajasthan, also familiar as Lake City. Upon arrival check in at hotel.

Morning after breakfast left yourself in depth of charm. Start your tour to visit the City Palace , built by Maharana Udai Singh on the bank of Pichola Lake, Jagdish Temple, Sahelion-ki-Bari ( Gardens of the maids of Honor ).
Later in the evening enjoy boat cruise on Lake Pichola .After a busy day come back to your hotel & rejuvante yourself. Overnight at hotel.

After breakfast leave for Dungarpur, nestled in the foot hills of Aravali & the land of varied wonders, famous for its unique architecture. Upon arrival check in at hotel.
In the afternoon start your sightseeing tour of city, by visiting Udai Bilas Palace, a superb example of Rajput architecture, houses of large number of rooms, royal halls & gardens. Later visit the Juna Mahal, a 13th a appealing structure built in 13th century. Overnight at hotel.

This morning drive to Bijaipur, enroute visiting Chittorgarh. Chittor the tales of valor & romance.Abode of various palaces & temples. Visit the largest fort of India Chittorgarh Fort, Victory Tower ( Vijay Stambh ) The Tower of Fame ( Kirti Stambh ), Padmini Palace & Kalika Mata Temple.
Later head straight to Bijaipur a small tiny village famous for its large castle. Upon arrival in check in at hotel .You can opt for various activites in fort. Overnight at hotel.

After breakfast check out from hotel & drive to Bundi, a little city sitting on a narrow gorge in the hills & the most picturesque town of Rajasthan. Upon arrival check in at hotel.
Post lunch embark on the tour of Bundi. First visit the prime attraction “Taragarh Fort” situtated on steep hill, the huge for was built in 1354 & finest paradigm of Rajput architecture.
Visit the Nawal Sagar Lake & Chaurasi Kambhon Ki Chhatri. Overnight at hotel.

After breakfast drive to Ranthambhore not only a national park it’s a ideal home for tigers & variant type of species , a superior example of Tiger Reserve in India.Upon arrival check in at hotel .
In the afternoon take Jeeps / Canters for 3-4 hour game drive to view the Great Indian Tiger in Ranthambhore National Park. Overnight at hotel.

Continue on the marks of Tiger. Take an early morning & afternoon game drives into National Park to see the tiger.Overnight at hotel.

Goodbye to Tiger. After a hearty breakfast drive to Bharatpur The Eastern Gateway of Rajasthan, A paradise for Bird Lovers & the home of Keoladeo National Park , the park is listed in UNESCO’s world heritage list. Upon arrival check in at hotel & overnight.

Morning take a Rickshaw Ride in Bharatpur National Park, the home of 375 amazing bird species.
Later check out from hotel & drive to Agra stopping at Fatehpur Sikri, known as Ghost Capital. Visit the tomb of Salim Chishti, Akbar’s residential complex.
Reach at Agra ‘the home of Taj’. Upon arrival check in at hotel & overnight .

At sunrise visit the Taj Mahal ( Closed on Fridays ), one of the seven wonders of the world. Built by Mughal Emperor Shah Jahan is a perfect example of most extravagant love.
After breakfast check out from hotel & opt for sightseeing of Agra Fort, the majestic fort of red sandstone stands on the banks of river Yamuna, continue to Itmad-ud-Daula’s tomb.
Later drive to Delhi & transfer to Delhi International Airport to board flight for your onward journey.